A Short History of FBI COINTELPRO

A Short History of FBI COINTELPRO

by Mike Cassidy and Will Miller

Call Now
Email Now
Originally printed via the Albion Monitor, the first Internet-only “newspaper,” it is no longer operational.

[Editor’s note: More information on COINTELPRO in the Bari case is available at the Monitor Judi Bari index. Much of the following was taken from Brian Glick’s book War At Home: Covert Action Against U.S. Activists and What We Can Do About It, (South End Press; Boston, 1989), a source for detailed and documented information on the history of domestic covert action against movements for social change.]
In early 1971, the FBI’s domestic counterintelligence program (code named “COINTELPRO”) was brought to light when a “Citizens Committee to Investigate the FBI” removed secret files from an FBI office in Media, PA and released them to the press. Agents began to resign from the Bureau and blow the whistle on covert operations. That same year, publication of the Pentagon Papers, the Pentagon’s top-secret history of the Vietnam War, exposed years of systematic official lies about the war. 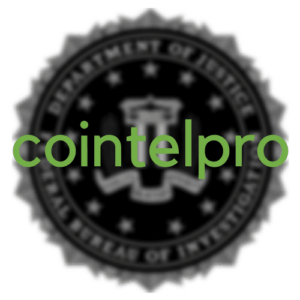 Soon after, it was discovered that a clandestine squad of White House “plumbers” broke into Daniel Ellsberg’s psychiatrist’s office in an effort to smear the former Pentagon staffer who leaked the top-secret papers to the press. The same “plumbers” were later caught burglarizing the Watergate offices of the Democratic National Committee. By the mid-1970’s Senate and House committees launched formal and lengthy inquiries into government intelligence and covert activities. These investigations revealed extensive covert and illegal counterintelligence programs involving the FBI, CIA, U.S. Army intelligence, the White House, the Attorney General, and even local and state law enforcement, directed against opponents of government domestic and foreign policy. Since then, many more instances of these “dirty tricks” have been revealed.

When congressional investigations, political trials and other traditional legal methods of repression failed to counter the growing movements of the 1950s, ’60s and ’70s, and even helped fuel them, the FBI and police moved outside the law. They used secret and systematic methods of fraud and force, far beyond mere surveillance, to sabotage constitutionally protected political activity. The purpose of the program was, in FBI Director J. Edgar Hoover’s own words, to “expose, disrupt, misdirect, discredit and otherwise neutralize” specific groups and individuals. Its targets in this period included the American Indian Movement, the Communist Party, the Socialist Worker’s Party, Black Nationalist groups, and many members of the New Left (SDS, and a broad range of anti-war, anti-racist, feminist, lesbian and gay, environmentalist and other groups). Many other groups and individuals seeking racial, gender and class justice were targets who came under attack, including Martin Luther King, Cesar Chavez, the NAACP, the National Lawyer’s Guild, SANE-Freeze, American Friends Service Committee, and many, many others.

The public exposure of COINTELPRO and other government abuses resulted in a flurry of apparent reform in the 1970s, but domestic covert action did not end. It has persisted, and seems a permanent feature of our government. Much of today’s domestic covert action can also be kept concealed because of government secrecy that has been restored. The Freedom of Information Act (FOIA), a source of major disclosures of COINTELPRO and other such activities, was drastically narrowed in the 1980s through administrative and judicial reinterpretation, as well as legislative amendment. While restoring such secrecy, the Reagan Administration also reinvigorated covert action, embracing its use at home and abroad. They endorsed it, sponsored it, and even legalized it to a great extent.

Much of what was done outside the law under COINTELPRO was later legalized by Executive Order 12333 (12/4/81). There is every reason to believe that even what was not legalized is still going on as well. Lest we forget, Lt. Col. Oliver North funded and orchestrated from the White House basement break-ins and other “dirty tricks” to defeat congressional critics of U.S. policy in Central America and to neutralize grassroots protest. Special Prosecutor Walsh found evidence that North and Richard Secord (architect of the 1960s covert actions in Cambodia) used Iran-Contra funds to harass the Christic Institute, a church-funded public interest group specializing in exposing government misconduct.

North also helped other administration officials at the Federal Emergency Management Administration develop contingency plans for suspending the Constitution, establishing martial law, and holding political dissidents in concentration camps in the event of “national opposition against a U.S. military invasion abroad.” There were reports of similar activities and preparations in response to the opposition to the Gulf War in 1991. Even today, there is pending litigation against the FBI involving alleged misconduct in connection with the near-fatal bombing of Judi Bari.

Although covert action will be adapted to changing social and technological conditions, only a limited number of methods exist. A study of COINTELPRO revealed four basic approaches.

First, there was infiltration. Agents and informers did not merely spy on political activists. The main purpose was to discredit and disrupt. Their presence served to undermine trust and scare off potential supporters. They also exploited this fear to smear genuine activists as agents.
Second, there was psychological warfare from the outside. They planted false media stories and published bogus leaflets and other publications in the name of targeted groups. They forged correspondence, sent anonymous letters, and made anonymous telephone calls. They spread misinformation about meetings and events, set up pseudo movement groups run by agents, and manipulated or strong-armed parents, employers, landlords, school officials and others to cause trouble for activists.
Third, there was harassment through the legal system, used to harass dissidents and make them appear to be criminals. Officers gave perjured testimony and presented fabricated evidence as a pretext for false arrests and wrongful imprisonment. They discriminatorily enforced tax laws and other government regulations and used conspicuous surveillance, “investigative” interviews, and grand jury subpoenas in an effort to intimidate activists and silence their supporters.
Fourth and finally, there was extralegal force and violence. The FBI and police threatened, instigated and conducted break-ins, vandalism, assaults, and beatings. The object was to frighten dissidents and disrupt their movements. In the case of radical Black and Puerto Rican activists (and later Native Americans), these attacks, including political assassinations, were so extensive, vicious, and calculated that they can only be accurately called a form of official “terrorism.”
For details, along with many examples of each of these methods, read Glick’s well-documented and heavily footnoted “War At Home.”

Mike Cassidy is a civil rights attorney and Will Miller is a Professor of Philosophy at U. of Vermont