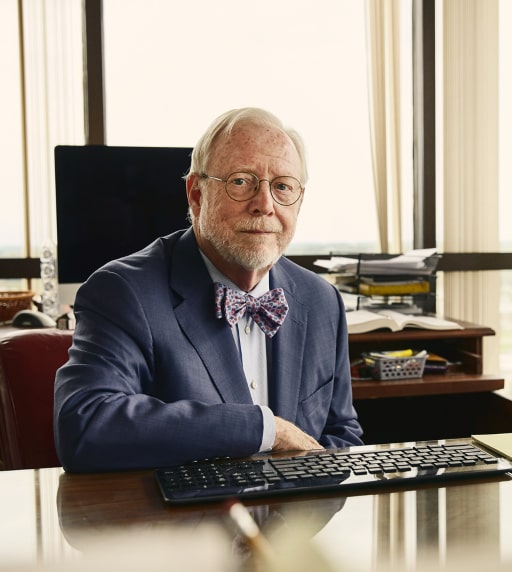 Thomas Carver will soon enter his 48th year of practicing law in the state and federal courts of Missouri. His portfolio includes representation of over 300 clients in federal cases and literally thousands of clients in Missouri state courts. He has faced the ultimate challenge in serious and life-changing cases on many occasions including the representation and trial of individuals accused of capital murder in federal court.

The representation of defendants in capital cases imparts a deep understanding of the law when lives are at stake. The wisdom gained in high stakes criminal cases has benefited thousands of his clients who have sought his help in other serious felony cases. The breadth of his experience runs from capital defense to complex white-collar criminal defense, large drug conspiracies, sex crimes, and extensive familiarity with criminal tax matters involving the IRS and state taxing authorities.

Aside from literally thousands of state court trials, he has represented litigants in over 70 appeals in state and federal appellate courts and has received the Robert Duncan Award for Appellate Excellence from the Missouri Association of Criminal Defense Lawyers. Other awards include being named to Best Lawyers in America and Missouri Kansas Super Lawyers for at least a decade along with selection as the “Lawyer of the Year” on five different occasions in the area of criminal defense. Recently, he was awarded the Bernard Edelman Tradition Award for mentoring young lawyers with an interest in criminal defense and is a past president of the Missouri Association of Criminal Defense Lawyers. He serves on the board of the Springfield Metropolitan Bar Association Foundation and is a past board member of the Springfield Metropolitan Bar Association.

Perhaps the greatest assurance clients can have when they entrust their fate to Attorney Carver comes from the legal publication and rating service Martindale-Hubbell/Lawyers.com. It is the oldest and most respected lawyer rating service in the United States. Prior to and after the advent of the internet, Martindale-Hubbell has served as the “go-to” rating service when lawyers and individuals look to find competent representation in unfamiliar locations around the United States. It rates lawyers’ ethical and legal abilities. The highest rating is “A.V.,” which indicates “the highest possible rating in both legal ability and Ethical Standards.” The A.V. rating indicates the ultimate in respect from a lawyer’s peers and is the gold standard when individuals are searching for the best possible representation available. Thomas Carver holds the A.V. rating. Those who have obtained an A.V. rating have achieved it because they have accepted the responsibility of providing the very best representation possible for their clients.

When asked about representing defendants in criminal cases, Carver said: “A lot of people who come to see me, symbolically come carrying a big bag of rocks on their shoulder. My job is to take it off their shoulder and to put it on mine. I take great pride in accepting their burden as my own and try as hard as I can to lighten their load. A federal judge once commented to me, when reflecting on why lawyers take on the challenges of criminal defense, that many times a lawyer is the only person between the client and the wolf at the door. It is with that spirit and attitude that I try to serve my clients.”